Walking with Rhino – Too Close for Comfort by Jenny Bowen

“Anyone need a change of underwear?” It has been a serious heart stopping, nerve wracking and exhilarating moment. How close had those rhino really been?

I was leading a Walking Women holiday, the first one for this company, and we had already had a list of firsts for many, including myself. We had had three nights in Mlilwane where we had walked with zebra, seen a lot of birds including the half-collared kingfisher which is a near-threatened species, watched traditional dancing and been up execution rock. We had then transferred to Hlane where we had been on safari and seen lion saunter past our vehicle and elephant munching on grass only 20m away and we had also spied a spotted genet streak in front of the landrover as we drove back to camp in dark for our gins around the waterhole.

But it was the rhino drive that I suspect everyone will remember, some with awe, some with trepidation and all with incredulity. Johannes, our guide, had been with us for our other safaris so he knew that we were as interested in the birds and the tress as well as the animals and the safari started off with us spotting an African hoopoe and a red-faced mousebird to add to our ever growing and impressive bird list. We drove around Ndlovu waterhole, Ndlovu meaning elephant in siSwati and aptly so as we had seen elephant there drinking from it the day before.

There was a rhino there in the distance and we used our binoculars to get a good look at him.

Further on we spotted a couple more rhino lying in the mud behind the branches of a fallen knob thorn acacia, Johannes slowed the vehicle to get a better look and then pulled off the dirt road and parked in the shade. We managed to extricate ourselves from the safari vehicle and listed to Johannes’s brief.

“And we must walk very carefully, and very quietly, watch where you put your feet so that you do not step on branches and crack them.” We collected cameras and binoculars and stood in line with myself at the back, I was the end marker and was to check behind us as well as in front.

And then we walked towards the sleeping rhino. As a group we have never been so quiet, ever! The nervous energy was palpable.

We slowly crept towards the rhino, weaving between the Tamboti trees, mindful of where we were putting our feet. And then the rhino got up and looked towards us through the branches. At this point we were about 30m away and there were a few dead tress between us and them, not much but enough to give a very good sense of invincibility, or maybe it was vulnerability. Either way the rhino started to walk towards us and we then realised that the second rhino was in fact two more and they had got up as well.

Johannes beckoned us quickly to get behind him and in the Tamboti thicket, and a few nervous looking faces looked at me questioning. “Move on” I encouraged. I was at the back in the open so it was for my benefit as well as everyone else’s that we closed up as a group behind those spindly trees. I noticed a slight increase in my heart beat, which is rather an understatement.

The first rhino came out from behind the bush and was now about 20m away. “They are going to their midden to poop” whispered Johannes, I was counting our lucky stars that we were not in the direct line to said midden (or I might have pooped as well).

The rhino stopped and looked at us and we bunched together tightly, all behind Johannes who was simply carrying and knob stick, the traditional implement for walking in the bush. No rifle, just a thick stick. He waved the stick in front of the rhino and this large mammal stopped and peered at us.

Rhino have poor eyesight but very good hearing, so we held our breathe and Johannes waved his stick at the rhino and the rhino simply moved on, I did wander if the stick possessed magical rhino deterrent properties. The rhino walked to the midden and we turned our attention to the other two rhino who also stopped and assessed us, from only 8m away, before lumbering on towards the midden.

There then ensued one of those magic tricks where you think that the last rabbit has come out of the hat but no, there are more that you expected. A staggering nine ‘crash’ of rhino walked past us and we watched in a heightened state of awe and nervousness. I have never been so close to so many rhino, and on foot.

Johannes mentioned for us to retreat away from the midden and despite watching our steps we hastily tip toed away pretty quickly to the relative safety of the safari vehicle.

“Well, I am glad I brought my binoculars with me”, quipped Jan, and we all burst into nervous laughter, quiet nervous laughter as the rhino were still very near to us. “Anyone need to change their underwear?” Asked Chris, and this was responded with more nervous sniggers and titters.

“Want to take more photos?” Asked Johannes, and he was overwhelmed with a chorus of “yes pleases”. So off we set again, this time without binoculars and instead armed with iPads, cameras and phones for pictures. We did not get as close, only 30m this time, and it was a pleasure to watch these rhinos munching on the grass undeterred by a whole load of women going “wow” at regular intervals. We had regained our composure and all seemed pretty happy standing with these one and a half ton beasts nearby, it is amazing how used you can get to an experience. If this was our first sighting of rhino whilst on foot I am sure we would have been pretty unnerved by it all, instead we were verging on nonchalant!

We stayed with the rhino for half an hour, watching them meander through the bush and following them on foot. It was an absolute privilege.

That memory will stay with all of us, nothing is going to beat that sighting of a a serious ‘crash’ of rhino.

And my underwear may have needed a wash… 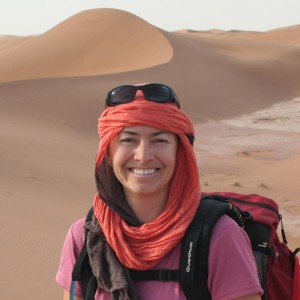 Do You Have Any Other Works? | Egyptian Revolution 10th Anniversary Series with Denis G. Campbell

‘How Can Teachers Ensure High-Quality Audio in Their Virtual Classrooms?’ | Teachers’ Tips #4

‘How Can Teachers Give Individual Support Online?’ | Teachers’ Tips #3

How Did You Come to Be Personally Involved in the Egyptian Revolution of 2011? | 10th Anniversary Series with Denis G. Campbell

Walking with Rhino – Too Close for Comfort by Jenny Bowen