Jamie’s everyday life is unexpectedly and dramatically changed when he goes on a school history trip to the Roman city of Wroxeter and places his hand on an ancient wall. He’s transported into an epic life-and-death struggle amongst the legions of Rome in a battle against the Celts. Jamie is trapped in the midst of this struggle-can he stay alive?

Eight-year-old Jamie is just an ordinary boy. He isn’t doing well in school, isn’t good at sport, and his mum despairs about him. But, while lying on his bed in the morning, he is convinced he finally understands the concept of infinity. If only he could explain it to his Maths teacher.
His situation takes an unexpected and dramatic turn when he goes on a school history trip to the Roman city of Wroxeter and places his hand on an ancient wall. As the air wobbles, compresses and releases around him he’s transported into an epic life-and-death struggle amongst the legions of Rome in a battle against the Celts. Jamie is trapped in the midst of this struggle – can he stay alive?
If he can survive, can he get back to his family and friends in the present?

Be the first to review “Jamie Meets the Romans” Cancel reply 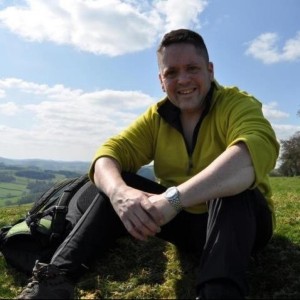 Having spent 5 years meticulously researching the historical time periods portrayed, and transposing current theory of space time and time travel into the mind of a 9 year old boy, Welsh author Will Llawerch has published the children's series "Jamie Meets...". Time-travelling adventures through British history are enjoyable for young and not-so-young readers alike. Will continues to live, and write, in Wales.
All Posts