Fortune in the Follow-Up

The fortune is truly in the follow-up. People who make a promise, and keep it, consistently win more business than those who simply farm business cards at a meeting to add to an impersonal mailing list or, worse still, make promises and never get in touch again.

Be a smart networker and find your fortune in the follow-up.

Whether you join a business network or attend free networking meetings, you are wasting your time and effort if you fail to follow-up on your conversations. Too often people make promises such as: ‘I’ll get back to you on that’, ‘I’ll email you as soon as I’m back in the office’, or ‘I’ll pop it in the post’. But they don’t follow through with the promise. What does that say about them as a business person? Reliable? Trustworthy? Efficient? Someone to do business with? No, none of the above.

The fortune is truly in the follow-up. People who make a promise, and keep it, consistently win more business than those who simply farm business cards at a meeting to add to an impersonal mailing list or, worse still, make promises and never get in touch again.

Be a smart networker and find your fortune in the follow-up. 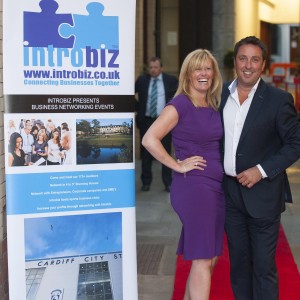 Tracey Smolinski was born and raised in Cardiff, where she grew up in a local public house. She spent her childhood surrounded by people, which contributed greatly to her love of people and talking to them. Moving away from the pub, Tracey found her forte in sales and worked at many local media organisations, selling and advertising. One day, her superior at the time decided to send Tracey networking to find more business. She didn’t really understand what networking was all about but went along anyway.After three months of weekly networking, Tracey still hadn’t secured any sales and felt that it was a complete waste of time and effort. After asking for honest feedback and taking some very sound advice, Tracey decided to give networking another go, from a different angle. She went on to sell £100,000 worth of advertising space in the next six months.The idea of Introbiz was born back in 2008 when Tracey realised that there was no distinguish-able networking company in South Wales and so she decided to go it alone. In January 2009, Introbiz was born and with over 300 members from a wide range of industries and sectors, it’s Wales’ largest professional business network.Demands for Tracey to share her knowledge and experience have grown significantly, which is why she decided to write a book to help anyone who’d like any advice when it comes to networking. Tracey also discusses the trials she’s faced as a business owner and how her own experiences have shaped the businesswoman that she is todayTracey has two children, Carly and Daniel, and is stepmother to Julia and Daniel. She loves nothing more than spending time with the family, creating happy memories.
All Posts